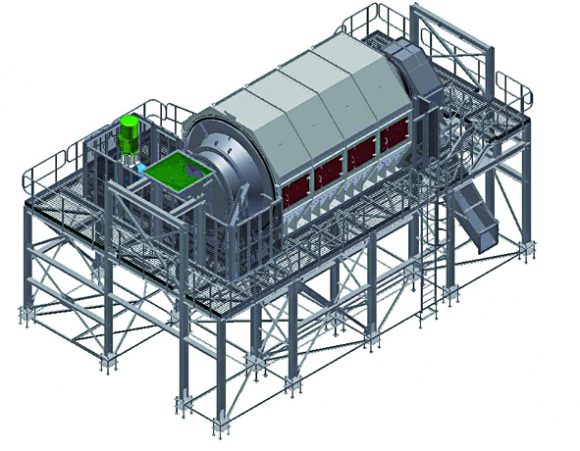 The collieries, Overlooked and Black Wattle, ordered the semi-mobile Bradford Breakers in July/August 2016 with delivery scheduled for end January 2017.
The machines operate at 300tph, breaking coal lumps of a maximum size of 350mm down to 80mm, and were ordered based on both their low capital cost and ease of transport. These features are crucial to junior and small miners who are increasingly exploiting the small coal resources that remain.
The breaker ordered by Black Wattle, part of the UK based Bisichi Mining PLC group, will be located adjacent to the washing plant. The breaker for ACC Coal’s Overlooked Colliery will be used to service the mine for its remaining life-of-mine of some 10 to 15 years, with the option to then be moved to another application.
Takraf Africa’s scope of work covers design and manufacture with the mines responsible for installation at site. This is a relatively simple activity as the breaker comes complete with a civils template, which is then cast into a concrete slab at site. A further advantage of the use of a single concrete slab in place of the more traditional multiple plinths is that it ensures more accurate alignment of the machine, the performance of which is highly sensitive to misalignment.
Sizing and cleaning
Takraf Africa has marketed these breakers, under licence from Terrasource Global of the USA, to the South African mining industry since the 1970’s, with the breaker having proved to be a loyal workhorse in the coal industry for the simultaneous sizing and cleaning of raw coal.
Developed originally for the American market and its softer coal to remove impurities and contamination from feed material, the breaker has seen incremental but far-reaching improvements over the decades by Takraf Africa (previously part of the Bateman group) to tailor it to the increasingly demanding conditions and difficult coal of the South African mining industry. The latest development, the semi-mobile Bradford Breaker, is a further demonstration of how this technology is adaptable to the evolving needs of the industry.
Junior and small miners
As the smallest model in the range of breakers marketed by Takraf Africa, the semi-mobile version offers the benefits of the traditional breaker in a more compact machine. With affordability being a critical factor for junior and small miners, the design of the breaker has been rationalized, without compromising on performance, with features such as a centralised lubrication system offered as an optional add-on.
Essentially a rotary breaker, the Bradford Breaker consists of a large revolving cylindrical drum driven by an electric motor. As the drum rotates, lifters lift the lumps of material to a pre-determined height and the material then drops, under gravity, onto the screen plates where it shatters along the natural cleavage lines. The machine is easy to maintain and repair, as it is driven from one end only by a simple drive assembly.
Tenova Takraf Africa, Maurice Malaza, Tel: (011) 201-2300, Email: enquiries.TAFR@tenova.com