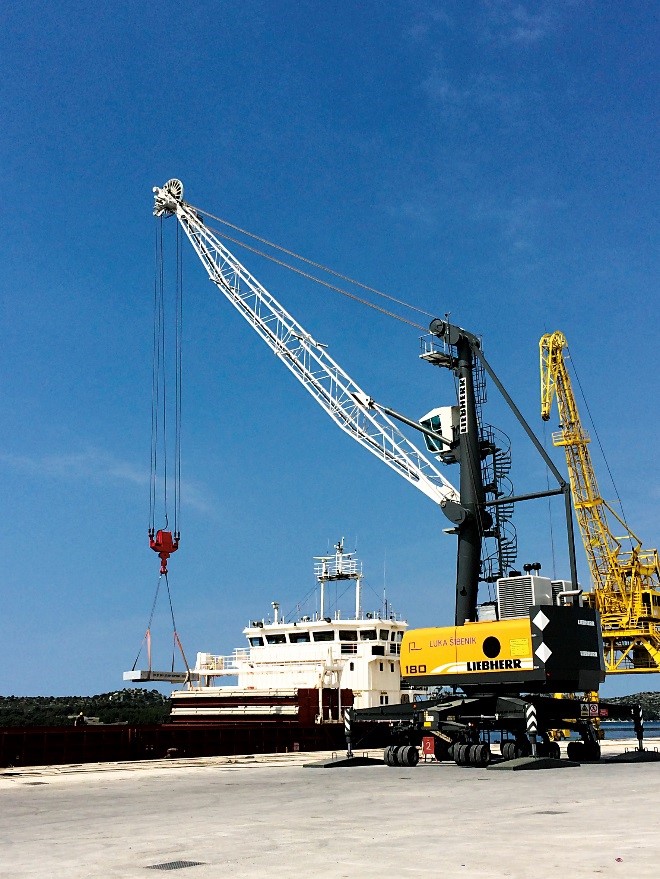 In the past, the refurbishment of used machines was integrated into the ongoing production of new cranes. Since 2015 a specialised department, namely the Liebherr Maritime Service Factory, has been dealing exclusively with refurbishment projects.

This department carries out extensive renovation work on used products from the whole range of Liebherr maritime products, without direct dependence on the manufacture of new products. Service activities extend from the repair and exchange of single parts and components, up to the complete overhaul of machines with a high number of operating hours.

The latest overhauling project was a mobile harbour crane type LHM 180 built in 2008. Used under permanent load for the last nine years in the harbour of Figueira de Foz, Portugal the machine was delivered from its former owner to Rostock in April 2015.

Upon arrival at Liebherr-MCCtec Rostock GmbH, the mobile harbour crane passed through a comprehensive restoration. Extensive overhauls and optimisations were carried out on the steel construction of the undercarriage, the slewing platform and the tower. The entire overhauling process including refurbishment of electrical parts, took twelve months and involved a team comprising 30 Liebherr employees.

After finishing the overhaul, the mobile harbour crane was bought by Petrokemija in Croatia where it was assembled and put back into service by the middle of March 2017. The LHM 180 has a maximum outreach of 35 metres and a maximum capacity of 35 tonnes (grab operation) and is now used for bulk and general cargo handling in the port of Sibenik, Croatia.

Liebherr Maritime is receiving an increasing number of orders for machine overhauls. Eventually, every machine achieves a certain number of operating hours and the owner has to decide whether to overhaul the existing machine or buy a new one. The purchase of a second-hand or overhauled machine is often an inexpensive and economic alternative. Despite low investment, no concessions need to be made in terms of quality of manufacture, customer services and support, or safe operation of the machine.

Additionally, the customer knows that the machine fulfils the proven quality requirements of a Liebherr product, as there is no dealer or external repair service involved. Overhauling existing equipment is also an ideal solution for operating companies that value familiar technology and rely on personnel who are specifically trained for the operation of existing machines, as no additional resources are required for adjustment processes.

The increasing attractiveness of overhauled cargo handling machines and components is reflected in the order situation of the Liebherr Maritime Service Factory in Rostock. Since 2013 the number of orders for part and general overhauls on maritime products from Liebherr has more than doubled. In 2016, nine overhaul projects were completed in Rostock.