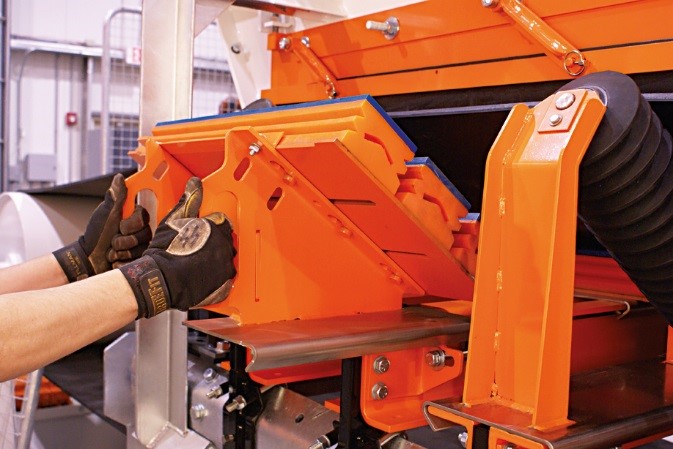 The largest cement producer in Texas, USA, has eliminated a source of fugitive material and equipment damage on one of its essential conveyor arteries transporting crushed limestone from a storage dome to two kilns through an underground tunnel.

The Martin Marietta facility in New Braunfels adopted several technologies from Martin Engineering to mitigate the effect of drop forces from 8-inch minus rocks falling 20 feet onto the B-06 conveyor, including a rock box, impact cradle, settling zone and skirt sealing.

Installed with a series of belt trackers to maintain proper alignment and a V-plow system to protect the tail pulley, the upgrades are helping the Hunter plant in New Braunfels avoid belt and idler damage, spillage and downtime.

According to Martin Marietta’s Rajeshwar Rao Akula, the conveyor problems were impacting operations across the entire facility. “We were experiencing ongoing issues with spillage, broken idlers and belt damage, causing downtime that could last for hours,” he explains.

“Every week or so, the system was shut down and a team of three to four workers would take the better part of a shift to go in with shovels and wheelbarrows to dig the system out and keep it operational. Add to that a belt replacement every six months, and it had become a costly mess.”

Jonathan Cole of Martin Engineering, inspected the system and helped issue recommendations, along with overseeing the installation of improvements. According to Jonathan, the problems began with the crusher, but extended along the conveyor and through the tunnel.

“The conveyor was originally built to handle 4-inch minus,” he observes. “The impact from the long drop blew out idlers and gouged the belt, causing misalignment and extensive spillage.”

After their analysis, the Martin Engineering team presented a detailed proposal offering a solution that involved several components working in concert to address the belt’s issues. “Our first recommendation was installing a rock box,” explains Jonathan. “Set three feet above the belt, it works like a series of shelves, catching and distributing the limestone with reduced force onto an impact cradle.”

Located directly under the chute, the impact cradle is mounted on four rugged steel I-beam supports, able to sustain an impact force of 12 000 lbs (5 443k). The specially-engineered impact bars are based on an aluminum T-slot design, which is surrounded by a layer of energy-absorbing 83A durometer urethane and coated with low-friction UHMW plastic to reduce friction and belt fraying.

Following the impact cradle within the 10.3m settling zone, the team recommended a series of adjustable slider cradles that support the belt to prevent spillage from belt edge sag and to eliminate entrapment points where material commonly got caught.

Another key element of the assessment was an external skirting system along the chute box, sealing the chute to the belt. Specially designed to provide dual-seal efficiency with a one-piece 70 Shore D EPDM durometer rubber composite skirt and an attached strip, the skirting floats on the belt and self-adjusts to maintain an effective seal.

“The wandering belt was a big concern, so we recommended a series of belt trackers with a parallel steering and training system every fifty feet,” Jonathan adds. “Another cause of misalignment was material getting caught between the belt and tail pulley, so we proposed a torsion V-plow as well.”

Mounted on a dual steel bar attached to the mainframe a few feet from the tail pulley, the V-plow has a unique suspension system that allows the polyurethane blade to rise and fall with fluctuations in belt tension. Any material carried back on the top of the belt return is deflected to either side of the frame before it reaches the tail pulley.

Installation by Martin Engineering technicians took less than two weeks, and coincided with scheduled breaks for other improvement projects addressing issues throughout the facility. Since the conclusion of work, monthly ‘Walk the Belt’ inspections conducted by Martin Engineering technicians have recorded healthy pulleys and no significant belt damage or need for replacement. Spillage cleanup time has been significantly reduced to an as-needed basis, without the requisite system shutdown.

“We are extremely impressed with how the system is performing,” Rajeshwar concludes. “The service and maintenance have been excellent, and we are already working with Martin on other projects to further improve operations.”