Stud welding is particularly beneficial where a regular ore flow is required, as there are no interruptions or recesses caused typically by bolt heads.

The leading manufacturer of wear-resistant Chromium Carbide (CrC) clad liner plates for heavy materials-handling applications in the mining and allied resources industries, Rio-Carb offers stud welding as a standard on OEM equipment, unless bolts are specified by the client. “Stud welding is a quick and robust process,” Rio-Carb director, Colin Maine, explains.
Typically, an M16 or M20 stud is fitted to a gun/chuck, which then places the stud in a pre-determined area. A 1 200 A DC current is applied for about three-quarters of a second. The electrical arc is initiated by a match-head size aluminium insert in the bottom of the stud, which de-oxidises the molten weld, shrouded by a ceramic mould. Cooling is virtually instantaneous, and achieves full strength immediately. “It is most important that the stud is placed vertically, and in the correct position, to within 0.5 mm,” Colin stresses. For this, we have developed a mechanised jigging system whereby the stud gun and stud is held precisely at 90°, and placed on a pre-determined point within 1 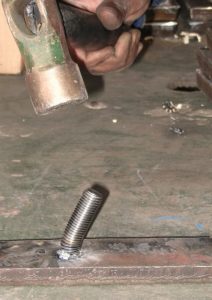 mm. This CAD-etched point is taken off the same plasma-cutting programme when the liners are made.”
The supply and application of a liner plate is however, only part of the story. The removal of conventional liner plates poses an additional issue, in that following corrosion and weathering, conventional countersunk bolts are difficult to remove.
Bad reputation
Removing liners that have been stud-welded, however, is a simple ‘one-person operation.’ Also, due to the long-life of Rio-Carb’s CrC liners with its MaxCS alloy, this corrosion can be excessive. Therefore, all studs are supplied in 304 stainless steel, complete with a galvanised washer and Nyloc-nut.
Commenting on the industry perception that stud-welded liners tend to have a bad reputation due to stud breakages, Colin explains that this is caused by studs cracking off on 400 and 500 Martensitic steels, which are not welded regularly. Rio-Carb liners have a weldable mild steel backing, which means zero breakages under normal usage.

The removal of conventional liner plates poses an additional issue, in that following corrosion and weathering, conventional countersunk bolts are difficult to remove

“All our stud-welding is certifiable according to American Welding Society (AWS) standards, which involve a sacrificial 15° minimum bend test on each batch of 100, as well as a torque test,” Installation has to be according to the specified torque range, denoted by a plastic collar on each liner.
Dismantling operation
The location of the mounting holes in the parent chute are replicated from that chute’s CAD programme directly into Rio-Carb’s Plasma-CAD programme. “Misfits and breakages in assembly are thereby zero,” Colin emphasises. Stud-welding requires simple operator-skill levels, and is virtually fully automatic with our process, which also uses pre-set parameters.
“For conventional applications, we have our Rapid Removal System (RRS) of CrC 700 hard-faced galvanised countersunk bolts, with a slot at the end to prevent rotating, while unthreading the nut at the end of its lifecycle. This offers a simple ‘one-man’ dismantling operation, without harmful grinding or cutting,” Colin concludes.
Rio-Carb, Colin Maine, Tel: (011) 908 1014
Email: info@riocarb.co.za, www.riocarb.co.za